It's official.  The Mandarin Oriental Hong Kong is bringing in the team from Da Dong from Beijing for a week in April - the 11th to the 17th to be exact.  Although Da Dong isn't my favorite duck restaurant in Beijing, I still thought the concept of bringing in the duck experts into one of Hong Kong's best Chinese restaurants will definitely create some fireworks.  I wasn't wrong, and I was glad to have been lucky enough to score an invite from the Hotel, along with other foodie writers/bloggers for a preview.

So this is NOT a review since it was on the Mandarin's tab.

We sat down to an excellent 1989 Pu'er Tea, which I very much enjoyed.  A well-aged Pu'er is nothing like the stuff you get at your average Chinese restaurant for yum cha.  Pu'er is a prized tea which like wine, is better with age.  It was almost poetic sipping tea and poring through Mr. Dong's collection of recipes and in particular, the artistic photos of his culinary creations, which are almost painting-like rather than plain photos of food.  His food dressing skill is definitely on par with some of the world's best.   Note to self: get copy of recipe book when available.

Our decadent 9-course lunch started with a trio of appetizers.


The first being 2 types of yam, steamed, mashed then formed into one scoop from both ends to allow the 2 colors to be distinct and separate.  The more commonly found purple yam on the left, and the now trendy Chinese yam in white on the right, believed for a long time to have medicinal qualities.  Both hand-mashed to allow bits of yam to chew on means you can savor the distinct flavors.  Dressed in a "thick cut marmalade" sauce of preserved plum, the fragrant rinds strewn over provided a bittersweet finish.  Sweet but not cloyingly so, this was a pleasant way to break fast and get the juices going.

This is as famous as Da Dong's duck and exquisite in taste and presentation.  Creamy livery smoothness delicately encased within a layer of aspic, then topped with delicate pieces of tangy mango and caviar.

And just to keep things interesting, a spicy hit with shredded duck meat from the wings of the duck, and tossed in a spicy numbing Sichuan pepper laced sauce.  Enough heat to keep you tingling but not so that you would break into sweat.

As gross as it may sound, I am one of the millions that love duck tongue.  The chewy gelatinous texture with a crunch from the cartilage around the area makes for a great many renditions of appetizers, unless you're in the "Western World".  But in soup, this is a first for me.  The delivery of a bowl of clear consomme with copious amounts of Morels, is not exactly a pretty sight despite the classy bowl in which it is served.  But taste wise, each spoonful is chock full of flavor encompassing the essence of morels and the duck tongues had a flavor reminiscent of duck fat but with a much more enjoyable bite.

And so here is the reason why we are here.  Da Dong's "Super lean" roast duck.  The chefs even brought their own poultry all they way from Beijing.  Apparently, only their littler ones will do.  The ducks available in Hong Kong are too big and fat to qualify.. 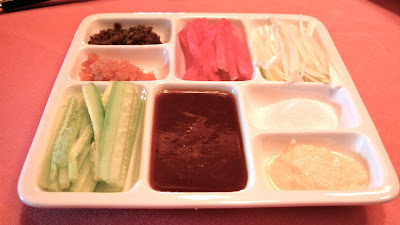 And Da Dong's signature condiment dish, 3 times the size of the competition.  Of course, the traditional cucumbers, Hoi Sin Sauce and julienned leeks are present.  But as aside from these, there are pickled vegetables, pink radish, sugar and a garlic puree if you want additional heat.

The sugar is especially critical for the very crispy duck skin, which is fabulous on its own but made better when dusted in sugar crystals.  We also learnt today that in the old days where emperors ruled, the empress, concubines and consorts were not allowed to use anything else but sugar for fear of offending the emperor with "dragon's breath". 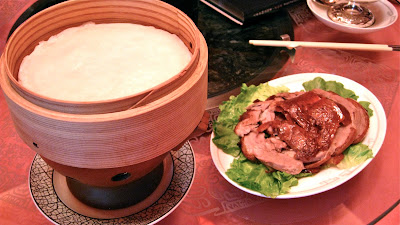 Like all traditional Peking duck, one is expected to wrap the thinly sliced duck, complete with a little meat, fat and skin into the thin pancakes, and choice of condiments.  The skin that Da Dong prepares is unique in that it is steamed into smooth, moist and chewy wraps, unlike a more common version which may be drier and fluffier than this.  No right or wrong, it's a matter of personal preference.

This was the prettiest dish at lunch.  The artistry was just brilliant and instead of focusing on the food itself, I wanted to accentuate the art instead.  Given the less-than-optimal lighting and the limitations of my camera, I had to choose.  A much better rendition is available in Mr. Dong's book.  The effects are difficult to achieve with brush on paper alone, let alone in a kitchen.  And the tastes did not disappoint either.  A traditional Northern Chinese way of braising the sea cucumber until it is so soft you can feel the collagen infusing into your skin as you eat it, and the roast scallions are a nice break of spicy sweetness.

Then, back to the duck with a piece of duck sauteed with duck gizzards, and then accompanied by a guest, a piece of chicken.  The sauce is addictive and would have been fabulous with a bit of white rice, but then again, I'm not the genius who thought to serve this dish with little jelly cubes made from Champagne and vinegar.  These were fun to eat and a great time to give the timmy a little reprieve from the all that good stuff prior, and to steady ourselves for more.  My only complaint: the chicken was a tad dry and chewy, but perhaps that wasn't the point.

For those who like the Chinese cabbage, don't forgo this.  It's possibly one of the better renditions I've had and more unique than the usual braised versions in chicken oil and/or Yunnan ham superior stock.  This slightly thickened gravy, prepared with the premium spice Saffron, with bits of chestnut and wolfberries, complemented the natural sweetness of the cabbage.  Although thicker than a soup, it was still good to the last drop.  The glazed chestnut was also a nice way to end the course like a French Marron-glace can. 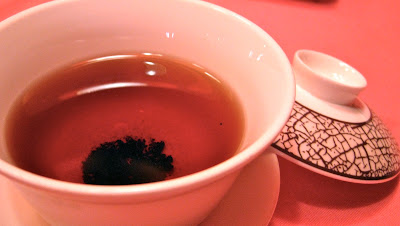 And then a timely switch of teas.  This was even better than the first varietal and much older that even our knowledgeable server was stumped.  All she could confirm was that it is older than the 1989.  And yes, it was that much more mellow and smooth.  Calling it a superior Pu'er does not do it enough justice.

The chefs probably knew by now that we were almost reaching our limits and gave us each a half-bowl serving.  But I'm glad we still got to eat this.  The goose liver was ultra fragrant, and less greasy like foie gras, so that it didn't make the rice oily.  I would have personally preferred the rice to be a little more fluffy and distinct from the next grain but overall, this was still a A- in taste.

Another one of those desserts I don't typically care for since it's hard to get very good young coconuts in Hong Kong.  But this was delightfully fresh, with none of the coconut rancidness one typically expects from coconut cream.  This is the real McCoy and not processed.  The glutinous dumplings filled with a smooth red bean paste were also very good although I was quickly reaching my limit and had to reluctantly leave the last one untouched.

Traditional Beijing snacks served to end a wonderful meal.  I wished I had capacity to try them all but alas, I only bit into the sweet yellow bean cake and sweet rice dumpling.  They're good but perhaps not my thing.  Paired with a good tea served at tea time and I might have enjoyed them a lot more.  At the end of a wondrous meal, and they were underwhelming.  Fairer comment next time perhaps.

A big thank you to the @MO_HKG for organizing the event, and a big shout out to my fellow foodies whom I enjoyed the meal with - @jasonbonvivant, Patricia Wong, @geoffrey_wu, @yummymummyasia, @mochachocolata and Wilson Fok from WOM.

Edena
A corporate animal who has a passion for cuisine of all kinds from anywhere, tennis (read Federer) and the wonderful world of Hello Kitty.